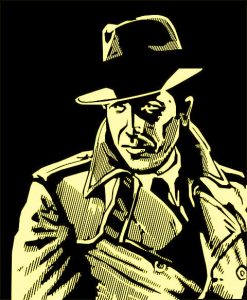 “The keys belonged to my husband. I believe they were what the killer was after.”

“What makes you think that?”

“I was up in my room the night Philip was killed — Tuesday night. I’d had a little too much wine for dinner and the three hours after, and I was trying to keep my bed from spinning out of the room. Around 10:00 I heard Philip arguing with someone downstairs. I heard a man yelling, ‘Give me the keys!’ I heard Philip threaten to call the police. And then I heard a thump, and Philip was moaning. And then another thump, and he was quiet.”

“Why didn’t you call the cops?”

“I was frightened. I thought he’d kill me too. That and I passed out. The cleaning woman found him in the morning before I came to. He’s been hit over the head with a marble bust of Beethoven.”

“So why’d the police finger you as his killer.”

“The cleaning woman told them she’d heard me threaten to kill him.”

“Actually, I believe my exact words were, ‘Sometimes I’d like to take that damn bust of Beethoven and bash Philip’s brains in.’”

“A cool mill. During his argument the night he was killed, I heard him say something about a million dollars in reference to the keys.”

“Hadn’t your husband ever heard of a bank?”

“Yes, but he’d also heard of taxes. Philip didn’t like to share. He liked to hide his money from Uncle Sam whenever possible. Anyway, the way I see it, we never did get divorced so that money is mine now, and since I didn’t kill my husband, there’s not enough evidence to convict me, so I’d like to collect my money and start fresh — maybe start a mink farm.”

“Ah, the American dream. All right, doll, I’ll take your case. I’ve always been a sucker for a beautiful woman with a gun.”

She pulled an envelope from her purse and pushed it across my desk. Here’s some cash to get you started and a number where you can reach me. However, if there’s anything else you need — and I mean anything — just give me a ring.”

It seemed a little premature for her to be talking about marriage before her husband’s body was cold, but then again, according to her, Philip Dare had been cold for a long time.

“I’ll find your missing keys, but you gotta make it worth my while.”

She stood up and leaned over my desk so that I could admire the looseness of her dress.

“Don’t worry Mr. Mackerel,” she whispered. “When I’m done with your payment, you won’t be able to walk.”

I wasn’t scared. I was pretty sure I could take her in a fight.

She sashayed over to the door, and before leaving, she turned, licked her lips, and winked. And then she was gone.

I went back to polishing my revolver.

Did Suzanne Dare actually kill her husband? Can Jack find the keys? How much polishing can his revolver take? To be continued tomorrow!