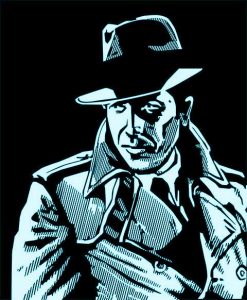 I didn’t expect to get much out of the Chief, so I wasn’t disappointed. I decided to cash in a favor one of my pals down at the precinct owed me. I hoofed it back to my office and rang him up.

He answered on the third ring. “Lieutenant Malloy here.”

“Well, that’s a fine how d’ya do for the guy who bailed you out at your son’s fifth birthday party.”

“Hey, I was a great clown considering I had such short notice.”

“Great clown? You weren’t wearing makeup, you were smoking a cigar, and the only trick you knew started with the words ‘pull my finger.’”

“That’s ’cause you let them fire your revolver!”

“Hey, wait and see who he asks for next year.”

“What d’ya know about the Philip Dare murder?”

“Someone cracked him over the head with a bust of Mozart.”

“Whatever. Hey, what do you know about this?”

“Just what I read in the papers. So, do ya have a suspect?”

“We think it was his wife.”

“He was going to divorce her, and she was afraid of being left without a cent, so she cracked his skull and tried to steal his gold fillings. What she didn’t know was he didn’t have any.”

“What the hell are you talking about?”

“He apparently took good care of his teeth. He didn’t have a single cavity.”

“So, what d’ya mean she tried to steal his fillings?”

“His teeth were pulled out. We think the wife was after his gold fillings, only there weren’t any. You know how woman are with precious metals.”

“Hey, every Christmas, my wife asks for a gold watch or a gold bracelet or…”

“No, no, no. The theory is ridiculous. First of all, don’t ya think his wife coulda found something else to pilfer if she wanted money so bad, and secondly, don’t ya think she woulda known that he didn’t have any gold fillings?”

“Hey, my wife thinks I’ve got a tattoo of her on my butt.”

“Thanks for the imagery. What about other possible suspects. Did ya check out the cleaning woman?”

“Yeah, she has an airtight alibi. She was home alone sleeping.”

“What about the butler?”

“Apparently he had some mob connections, but he says that’s in his past, and we believe him.”

“Did you guys turn anything up during your search of the house?”

“Nothing out of the ordinary.”

“How about some keys?”

“Keys? I don’t think so. Are you keeping something from me, Jack?”

“By the way, Rusty, when you see your kid, tell ‘em I want my revolver back. It’s my good one.”

What’s up with Philip Dare’s missing teeth? Will Jack ever get his good revolver back? Can he solve the case before the story ends in two days? To be continued tomorrow!